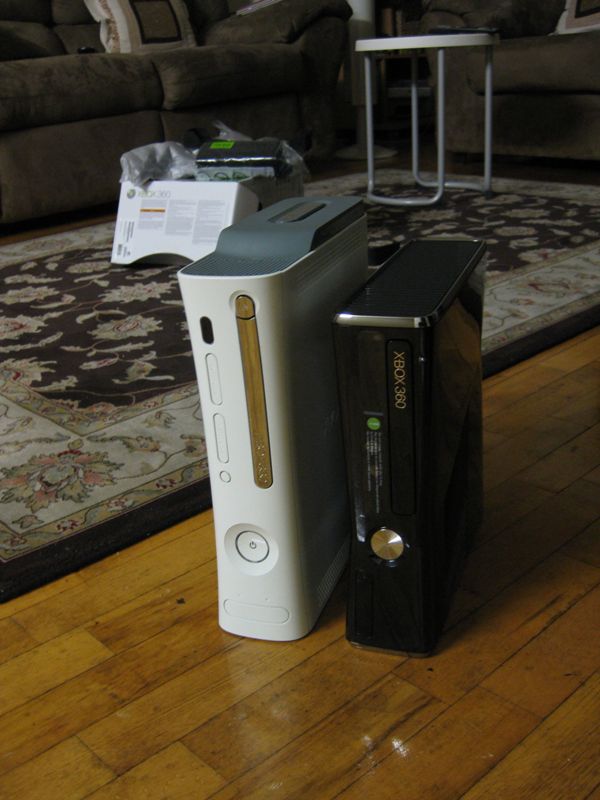 If you are among the numerous past xbox owners burnt by the infamous RROD and were holding out to replace the box with the new re-designed XBox 360 S, chances are, you have a lot of content on your old xbox which you want to transfer to you new shiny xbox.

Ideally, you should have been able to just connect your old xbox the new one and transfer your content, but that requires an official “Xbox 360 hard drive data migration transfer kit” (seriously, that’s the full name)… Microsoft being greedy as always, doesn’t include this cable in the new Xbox and wants you to pay $15 + shipping for it.. not a bad price, but considering you only need it once and that is because of Microsoft’s decision to change the HDD design in the new console (for good reasons) and having just forked out a good $300 on the new console, it is ridiculous to pay that kind of money to MS again.. so if you are still with me, not all is gloomy.. read on for a couple of free solutions…

First, either of the two solutions I am going to talk about here will require that you have access to a USB thumb drive. In case your mind is still set on the data transfer kit and are thinking of contact xbox support to see if they can send you a free one (like they used to last year), take my advise and don’t even bother… I was on phone for over an hour talking to level 1, then level 2 and then finally the top level, level 3 support and all I got was a lame advise to go and try in a B&M Store to see if they will let me use their display xbox to hook up my HDD…

If you are still reading, then here’s the simpler approach of the two… do you have a friend or neighbor who would let you use their original model xbox? If so, then just take your HDD and a USB thumb drive and connect them both to their xbox, and then in system settings –> storage, you’ll see the options to transfer the content for the hdd to thumb drive… if you don’t have the options in there, make sure you update the system software on the xbox…. once you are done transferring content to the usb drive, just connect that usb drive to your new XBox 360 S and do the reverse… depending on the size of your content and the thumb drive, you might have to repeat until you transfer all your content… btw, don’t bother about game installs, you install them again and content you bought on xbox live can be re-downloaded… Also, don’t forget to transfer the licenses to your new xbox. Visit the following site for instructions:http://www.xbox.com/en-us/support/systemuse/xbox360/licensemigration

Ok, you are still with me.. hmm, so that option 1 wasn’t an option for you… well you are not alone.. that was the case with me too. So here’s the option 2. Not as easy or straight forward as Option 1 or ideal solution, but it works and it doesn’t cost you a dime. Here’s how it goes… btw, if you are not good at or comfortable with taking things apart and putting them back again, this might not a wise solution for you. You have been warned!
Even though new Xbox is using another proprietary HDD format (at least from the looks of it), it is actually a step closer to using the standard drives than the old one did.. the new slick looking HDD cartridge is just a casing for the standard 2.5″ SATA drive like the one used in the old HDD case, but this time, the connectors are the standard sata connectors, which is the key here… So all you have to do is to pop open the HDD from your old xbox HDD case. Not sure of how to do it? Just carefully follow these instructions:  http://www.xbox-scene.com/tutorials-xbox360/open-xbox360-hdd-drive.php
Now that you have the standard 2.5″ SATA HDD from your old xbox, just pull the HDD cartridge from the bottom (or right side, depends on how you place you xbox) of the new Xbox 360 S and very carefully try to insert the old HDD into the slot. Take your time and make sure you are seeing the SATA connectors inside the new xbox and you have aligned the pins on HDD with the slot in the xbox, and gently press it into place. Again, be very careful here, you don’t want to break your brand new xbox trying to save your 20 bucks….

Ok, so you did it… you have your old HDD in the new xbox.. just power on the new console and it should just work with your old hdd like it was it’s original drive… ignore any alerts you see about the license or any thing and head on straight to the system settings –> storage and plug in the usb drive and transfer all your content to the usb drive. Once done, power off the console and unplug it and carefully remove the loose HDD from the bottom. You may have to use a pliers if you can’t get the grip to hold it with your fingers, but please be gentle. then you just insert the new cartridge in place and transfer content from the USB drive to the new HDD… That’s it really… you did it. Now go enjoy… and maybe join me on live. You’ll most like see coolpal playing MW2, he could use your help kicking some ass…. 😉

UPDATE:
Now that it’s been a while since the new Xbox has been out, the sellers from China already came out with authentic looking replacement cases for the HDD bay.. so you can buy something like this: http://www.dealextreme.com/details.dx/sku.48653 and make this a permanent solution without any fear of knocking the HDD off while moving the xbox. This makes the new 4GB slim a lot more value for money.