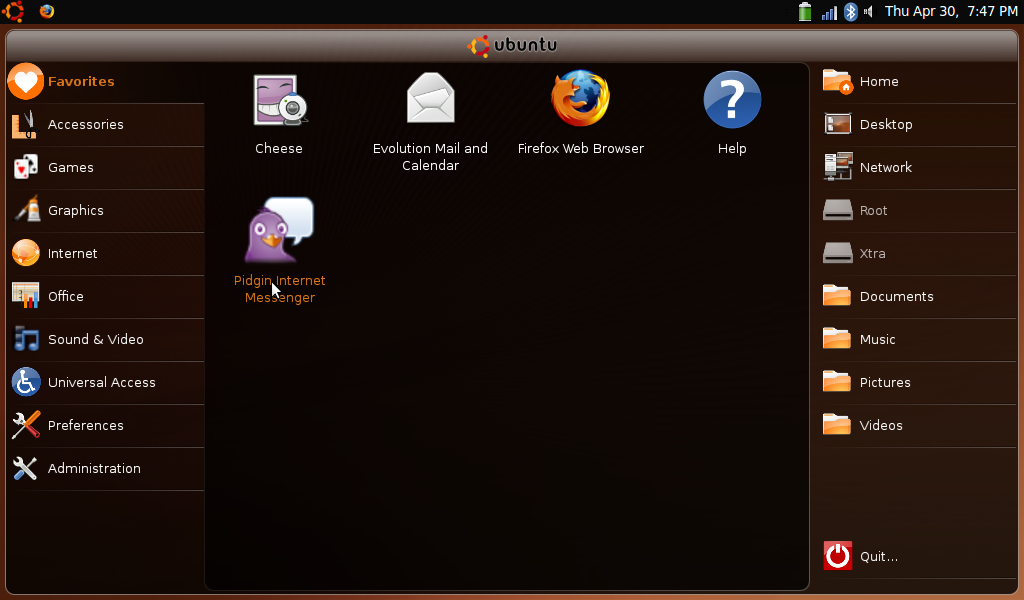 Everyone was getting a netbook lately and so did we… why not, they are relatively cheap (I meant, less expensive.. though same can be said of build quality on a lot of these in the market), tiny, ultra mobile and well, can do what a computer on the go should be able to do. We first got a MSI Wind U120 and really liked the not so small screen in a amazingly small package, but the keyboard was something that annoyed me a lot.. but again, that is to be expected in such a size right? Anyway, we found enough gripes about the MSI that we returned it our favorite store.. Costco 😉 and got a Samsung NC10, which supposedly has a better keyboard, more battery life, has bluetooth and built better than the MSI…More importantly tho’, my wife really liked the pink color.. after all this tiny computer was for her.. so anyway, we now own a Samsung NC10 and are really happy with it. It came with Windows XP and performed well for what we intended it to do, like the usual emails, word processing, connecting to office computer via Remote Desktop (rarely) and mostly watching streaming video (not HD of course).

So ubuntu came out with their latest release 9.04 code named ‘Jaunty Jackalope’ (funny, I know 😉 ) which included the usual desktop version (which I promptly upgraded my desktop to) and a server version, but also new in this release was a version custom built for netbooks called the Ubuntu Netbook Refresh (UNR) which supposedly was optimized for the small screens of the netbooks… so that sounded interesting, and oh yeah, the screen shots that were floating around on the web only added to the urge to get it on our NC10, and soon enough I downloaded the image and got it onto a 2GB USB drive (the instructions and tools are available on ubuntu website) and used it to boot into Ubuntu to give it a try..

First impressions… the default desktop style is the new netbook style, which has all the applets (that’s what they call them) arranged into pages, and favorites page  (seen in the screenshot) being the default. It came with the usual firefox for browsing and a nice little app called pidgin for instant messaging which can handle almost all the well known IM formats out there and a bunch of games, all the usual Gnome stuff and as well as Open Office.

Did I like it? hell yeah.. I should say the new UI itself won me over, and I wanted to get it on my netbook, so I started the partition manager and discovered that the default has 3 partitions (all primary) on the 160GB HDD. One tiny partition for the restore windows thingy, one for the XP partition and one additional NTFS partition (presumably for storage etc.,), but I guess that’s the default setup with most XP netbooks out there, since I saw the same setup on the MSI as well… I had to resize the last NTFS partition to make room for the linux installation, and created an extended partition from the newly created free space, in which I created a logical partition for installing Ubuntu (formatted it to the new EXT4 fs, and set it as mount point ‘/’) leaving 3 gig for linux swap (I have 2 gig RAM). I did this as I am used to doing this since the early days of linux installation, but for most novices out there, you don’t have to mess with anything… I think the install procedure let’s you pick the drive you want to re size and does all this automatically.(**A word of caution.. messing with partitions is relatively risky procedure, so do this with care and make sure you backup your important files before you start such an activity!!!**… u have been warned 😉 )… then I proceeded with install and I am not sure how long it too, ‘coz I did this before going to bed, and by morning, ubuntu was ready on my NC10…. the grub bootloader was installed by default and it had options for the Windows XP on my other partition and also to the boot loader on the tiny restore partition.

I started playing with ubuntu on the NC10 for a few days, and there were some strange problems with wifi card at the begining, but they seem to have disappeared after I started messing with the drivers and finally reverted back to the original driver… anyways, finally after a day or two of messing around and several restarts, I got my wifi card working.. In case you are facing similar issues, the driver that loaded by default ‘ath5k’ was the one that finally worked.. I wasn’t sure if it was the restart that fixed, or the intallation of backports drivers, but the maddogwifi didn’t seem to work and during the time I was having trouble with wifi in ubuntu, I learned that restart from ubuntu is not really resetting everything.. you had to shutdown and start again.. and also, the problems with wifi were probably because the wifi card was disabled somehow (I am saying this ‘coz during that time, wifi wasn’t working in windows xp either)… anyways, since it started working again, I assumed the restarts fixed it actually, and hopefully that’s something which happened only with me and I’ll try to forget and think it never happened 😀

Once I got my wifi working, I really tried to use it for a few days, and honestly wanted to like it and alsmost convinced my wife in using ubuntu more than windows xp, but I failed to do so, and I’ll tell you why… firstly, the things I liked about the UNR on NC10. The system booted up fairly quickly, well under a minute and defintiely faster than windows, and also behaved well when going into sleep and coming out of it. To my surprise, a lot of feature keys (fn + keys), like brightness control, volume control, sleep etc., worked right out of the box without any tweaking. As I already mentioned, the applets and the animations when launching them were nice eye candy if nothing else, but the netbook UI is probably good for the tasks that netbooks are inteneded for.. well thought of 🙂 .. in case you think differently of the new UI (maybe because every app takes up most, if not all of the screen etc.,), you can always switch to the desktop version. And if you are a fan of linux, that’s one big thing you’ll like about this whole setup…

…but here are the not so good things about UNR on NC10. My first gripe is about the screen brightness. The screen on NC10 was a lot brighter than I wouldn need when under windows, and most of the time, I keep the brightness at 50% or lower in xp, but in Ubuntu, the screen brightness (which always defaulted to 50% on restart) was all gone.. the 100% brightness in ubuntu is definitely no 100% I’ve seen in windows, and tho’ usuable at around 80%, it really seemed too dull, and especially the brown theme probably made it look worse.. and to add salt to the injury, everytime the screen goes dim due to inactivity or because system went into sleep and is awaken, the brightness is restored back to 50% or something which is too dull, and I had to increase the brightness again which is very annoying. Also, the brightness keys were a little too refined, and to get to 100% from 50%, it feels like I had to hit the brightness up some 20 times (maynot be the real count, but that’s how you feel it. U can always keep holding it until it reaches 100%, but you get the idea of how frustrating this is…). The second gripe is, overall, the system felt sluggish. It boots up very quickly, but once it’s up, the browsing seemed sluggish and I don’t think the included video drivers performed as well as the windows drivers, so for most part, ubuntu felt slower than windows xp. And when it comes to non-techies, installing various plugins for regular browsing habits is a big turn off… I won’t blame ubuntu for this, as they did include all non-proprietary stuff but that’s not everything.  Some other simple things, for which I am sure there are hacks, like the key to turn on/off wifi doesn’t work, and this could be a very important thing while on road to preserve battery life.

So now that I have used UNR on NC10 for about a couple of weeks, how do I feel about it? Well, for once, mainstream linux distros are paying attention to the rapidly increasing netbook segment which is welcome move, but the UNR edition is still not purely plug and play on the NC10. I did like the interface, but it still seemed a bit sluggish, so overall, we find ourselves using windows xp more often than the UNR… and it’s been two weeks, so I am bored already. I am yet to install my favorite Mac os X on NC10, but based on the chatter on the net, I will need to replace the wifi card, so I am still holding off, and I own a macbook pro and that is my primary laptop, so I am not so inclined to install os X on the NC10 yet. But good ‘ol MS released the RC1 of windows 7 yesterday, and I really liked the new windows on my desktop so far, and I’ve heard it’s pretty good on netbooks too… so up next, windows 7 on NC10 😉