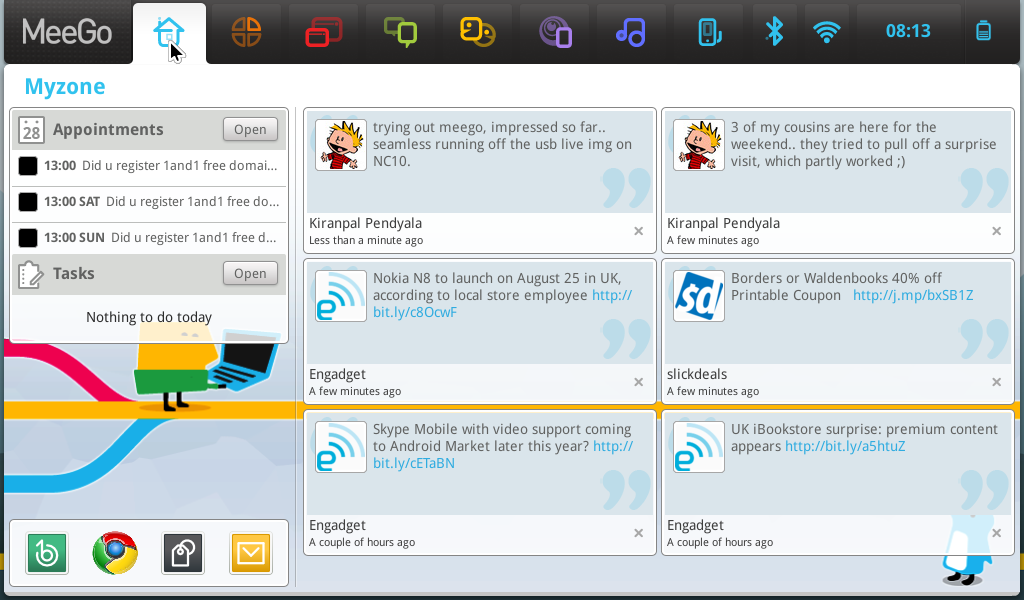 I am a sucker for new software, especially when it’s free. I briefly tried the Moblin 2 when Intel released the first beta last year and liked the UI and the way it worked on the tiny netbook screen. Moblin, short for Mobile Linux, was supposedly built with netbooks and nettops in mind and seemed pretty and fun but thou basic functionality all worked right out of the box, but a lot of hardware was still not working at the time and I quickly forgot about it… well, almost forgot.. until Meego 1.0 was released.

Meego is the combination of Intel’s Moblin and Nokia’s Maemo projects, tho I am still not sure how they came up with the name ‘Meego’. Meego is aimed at providing a fast and trendy OS to low powered internet devices like netbooks, MIDs, connected TVs and even car Infotainment, but as of this posting only netbook version was officially released. There were two versions of the release, one which requires you to accept Google’s EULA. Downloading and installing Meego was a breeze like most other linux distros these days, but should you need assistance, Meego has a pretty straight forward wiki post here: http://meego.com/devices/netbook/installing-meego-your-netbook ..In my case, I prepared a bootable thumb drive with the Meego disk image on Mac using bit copy and booted off the thumb drive on Samsung NC10.

I haven’t completely installed Meego to the HDD yet as I already have Windows 7, XP and Ubuntu NR installed and to install Meego, I’ll have to replace one of the existing OS so I wanted to try it out some more to see if It will actually replace any of these on my netbook. So far, It’s been running extremely well from the thumb drive, and here are my initial (or first) impressions..

I am really liking the way these linux projects are evolving and that can only mean one thing… awesome things are on the horizon.. imagine Microsoft trying to 1 up Meego.. not like windows 7 is bad on netbooks, but clearly it’s not meant for netbooks and tiny internet devices.. overall, my first impressions of Meego are really positive. Now get these things on car Infotainments already… those are really lagging behind on technology curve.

Here are some more screenshots of Meego on NC10.